Wednesday! Bored! What to do? Well since I’ve been granted elagabiity for me two bedrooms (not a one bedroom and a boat load of extra money off me) I decided to furnish said room! I knew I needed to get rid of that monstrosity of a bed that gave about an inch walkway around the room itself and trade it in for a single (or bed settee). Might need a carpet too as it has the last of the laminate flooring in me flat.

Starting with a bloody good hoovering (I hadn’t been in there for a while) I forgot how big the actual room was. I had to get the furniture required. Off to IKEA for a system I have used years ago. While I visited the cafe for the obligatory meatballs (you’ve just got to) I gazed upon a woman who was the spitting image of someone I knew years ago. She had her mother with her (again looking like the original mother) and she pushed a child in a pushchair! My heart nearly stopped as I thought this was Lina! It wasn’t!

So a five by five hole storage unit was purchased!!!! Now the last time I bought one of these I’m sure it cost a couple of hundred quid! This time (with my IKEA family card) it cost nintey shekels only! Bargain!! Getting it home nearly crippled me as even my freelander seemed smaller than it should have been. Three boxes over the passenger side with the last box popping over my headrest and into the nape of me neck. (A sudden stop would end up with me looking like an extra from an Daesh video clip)

The instructions were straight forward (😕) so I collected the tools to make the job easier, (electric screwdriver for starters) and emptied the boxes to see if everything was there. Yup, everything there so I started. First two screws in and the separators banged through I noticed something not right!

Yup the very first panel was back to front! (Why don’t men read instructions properly?) so it all came apart again! (Note to self, READ THE FUCKING INSTRUCTIONS) 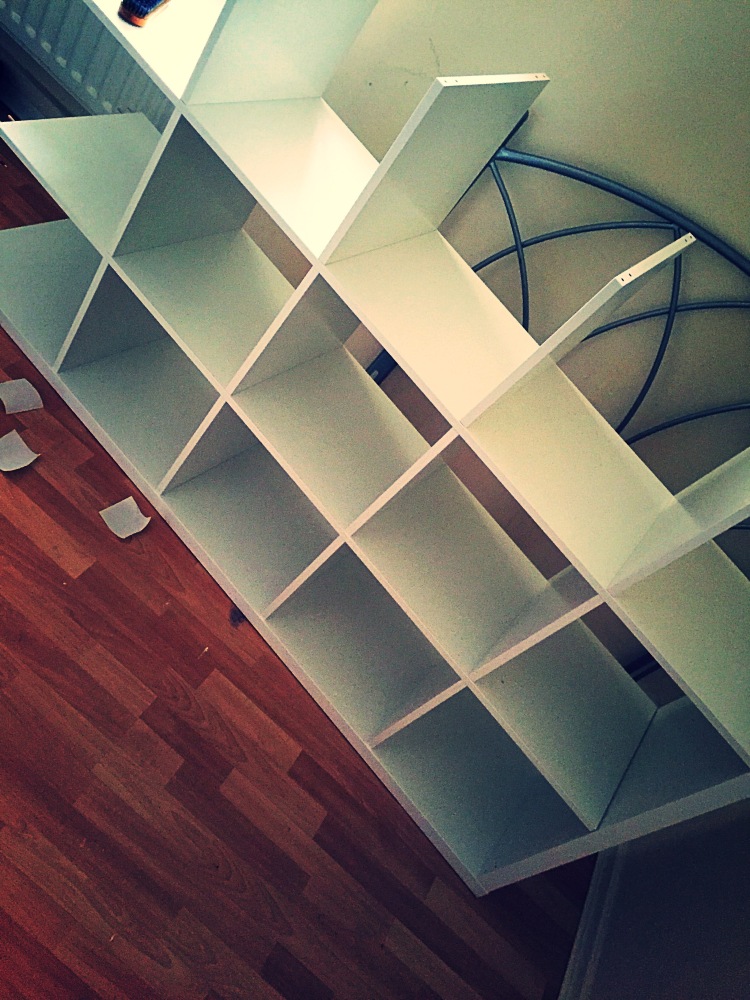 It only took an hour (if that) and with only a little fettling, it all came together grand! Steady and straight it’s now sitting in prose of place along the back wall of me studio/ office/ spare bedroom. Next I need me desk in and the bed settee! But that’s for another week as I’m off tomorrow to do stuff with H4H

So now I can get all me stuff out of me living room and use it as a living room again, not a bloody art studio! I’ll miss Bob the storm trooper, but he’ll be safe and comfy in his own room waiting to frighten the shit out of visitors 🙂