For the ex REME that one. After having a later than planned breakfast and forgoing the early bus to the national park, we decided that an hour and a half would be best spent on a scooter again. (I love this idea of freedom, why didn’t we do this on day one?) another “Hog” was hired and duly died before we got on it, so another was sought. Bright yellow and two helmets blue and pink (bovvered?) we checked our google map (yes I said iPhoto’s one yesterday but I lied, it’s google) and off we went. A 70 kilometre ride with no fuel. At least this time I knew how to start the thing. 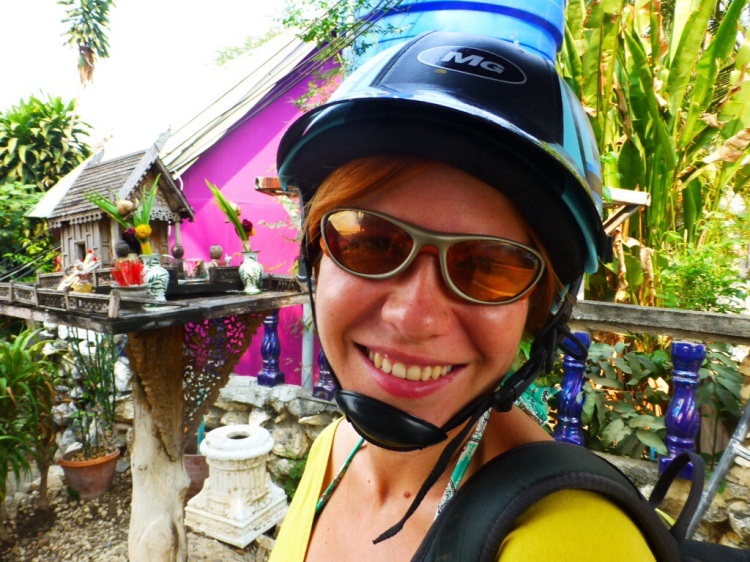 The roads were full of busses, lorries potholes, some of the bigger vehicles were happy to do a three point ‘U’ turn in the middle of the duel carriage way. (Twice I came close to soiling myself) at last we were out of the urban environment and into the rural district. The roads were better than some in Europe, with more considerate drivers too (I know we are white, therefore exempt any blame for anything) but this was a dream. But it’s not until you ride your scooter for a long time on a long road that you realise how numb your bum gets, so a couple of rest stops were required.

The Arawwan National Park hoved into view and a welcome stop was, well, welcomed. Now I had been told about this place and it’s seven waterfalls, each one a little further up a mountain (the top one was a 2.5 Km trek) and each one gradually looking better as you go. I wasn’t surprised when we got to the first one and got into the crystal waters. It was beautiful (the pictures are all mixed up until I get the film from the to pro sorted) HUGE fish swam happily amongst us, and some decided to eat our skin ( just like the ones in the “Happy Feet” shops) but only bigger, and bigger bites!!!

Oh yeah, monkeys, loads of them, all thieving gits too. But enough about those, and their amazing antics with their willies. As we progressed up the mountain, the air became cooler and the waterfalls became taller, and the little pools became bigger and more full with people as the day became warmer, (you get the idea) it was beautiful. Noises in the trees, the birds, the beetles the water flowing, everything made for a tranquil walk, all except the walk! It was a hike and a half! Through streams, over rough ground, along rock faces on rickety wooden (bamboo) steps. I was proper bollocksed.

Photographic opportunities were everywhere. And hikers were strewing the wayside finding the perfect shot.I’m sure we got a few, and even turned on the video mode on my camera so I could download the film ( nope, the memory is dead on my iPad and I need to get rid of stuff) but I’m sure once I hit my mac air, it will be done.more swimming, more hiking and yet NO temples at the top of anywhere! The only place I’ve been so far with nothing to worship at the top.

Once we actually made the top waterfall (7) we were greeted by the cliff face expanding upwards still! But the path (haha path!) stopped there. This was the last place to swim in, and we did, right up until one of the bitey fish bit my right testicle. I screamed like a girl and decided that I had been Manley enough for the day. So I made my excuses and left the pool. The walk down was going to be quicker (it he taken over two hours to get up there) but more treacherous (walking around Helmand was less treacherous than this path/ ledge/ cliff/ treacherous path) and as we were walking for three! We took our time 🙂

Biking back took no time at all, well obviously it did, but we seemed to be travelling faster (the fact that I had no fuel left may have helped our speed) and the multitude of madness which was the mornings traffic was gone) EVERYTHING was gone, we tried to find a food place that we saw on the way there that sold BBQ chickens…. Gone. So eventually we got back to the sprawling suburbs of Kanchanaburi and promptly took the wrong turning and ended up the wrong side of the tracks of the train line of death!

So ends another fantastic day in Asia, tomorrow we are travelling by bus to the old capital auttea ( I know I haven’t spelt it right) it’s pronounced “EYE-YOU-TIER” and that is supposed to be beautiful. I hope you all enjoy the pics, and at least have a bit of a laugh at the words. Night 🙂