I tried, oh how I tried to think of ANY excuse not to go in a boat today. From waking up and brushing my teeth noticing the rash cased by my error in judgement for the wetsuit choice yesterday, to the fact that i my have had a heart attack during the night (I subsequently found it was wind) a good fart displaced that. I wasn’t being a girly girl or anything,,,,,,well actually i was. The boat yesterday didn’t half make me feel queer! (Not that way) Driving into the centre I wondered if i could get away with being stopped for a speeding violation by the local ‘Rozzers’, but they obviously work a shift system where its always too early to start. So there i was, at the dive centre, wishing beyond hope that the boat had sunk and joined many more interesting wrecks at the bottom of the deep blue. Not a chance! My time had ran out, I was going. Luckily enough i had popped half a packet of sea sickness tablets that evening and a few more before i left the flat. (I suppose i was planning on having SOMETHING in my stomach to up chuck over the side)

Actually the trip was fantastic, Three of us plus the dive leader. The other two were Americans (They can’t help that can they) but they had burst the chains of supremacy and moved out to Australia. Kit sorted and on the boat we sat off. Now as I’m sure i have mentioned, getting out and getting back in are OK, we move, the wind blows and you know there is an end state to it. Its the bits just before, or just after the dive that do my box in. but this time felt nothing, (I didn’t dwell on that fact too long) sitting on the edge we rolled backward into the briny blue……and my mask leaked like a spy caught in the web of Mata Hari!!!! I tried to purge it, nope, i tried to tighten it, nope, so i surfaced and got the spare. The Captain of the boat looked quizzically at the mask i handed him then abruptly ripped the nose piece off and gave me a new one (Thank Christ there WAS a problem.) Down we went! 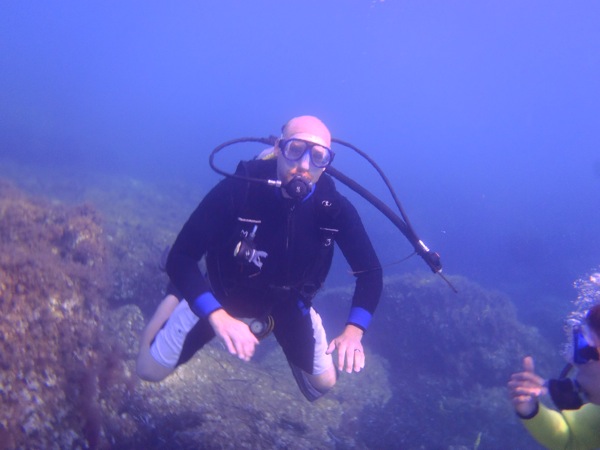 Caves, bloody caves everywhere. and we were going to swim through them. this was my first visit to any thing like this and i found the while experience fascinating, mind you i was wearing a BIGGER tank (in air volume that is) so confidence was high that i would at least get out of the water using my own air. Hopefully the pictures i took (Yes i took a camera) turn out pretty cool (again i will see them as i add them to this blog! looking at the seabed, with the grasses swaying in the current. It looked like the actual floor was moving, not the vegetation.  At one point i moved to dive down deeper and i felt no resistance on my fins (They were out the water) as i hadn’t looked up, i hadn’t realised we were only a meter or so from the surface at that particular point. The whole dive went without hitch, well i say that but the female Septic disappeared off into the realms of the surface as we were heading down past ten meters. (apparently she added a LITTLE air to her buoyancy suit and flew like superman to the top (That could have been SO wrong if we were any deeper.

At least now i have sussed out that i need little weight and a huge tank full of lovely underrated air strapped to me (and possibly a donkey tank hidden in there somewhere too). As i sit here now writing this missive, i can’t feel the floor and surrounding walls move up and down with the waves. I don’t regard this feeling as repulsive, but if it keeps on, i will be driving the porcelain truck soon. I hope you like the pics.

For my friends (and family (wherever you are)) X

One thought on “and Ive lost my life, for i toss and turn i can’t sleep at night.”