Give this one a whirl Paula!

I apologise for the missing blog last night, but i was otherwise occupied! In actually fact i was absolutely positively knackered after splashing around in a swimming fool for ages practicing the techniques and methods of rescuing a diver (On top, at the bottom, unconscious or panicking.) physically i was shattered, mentally i was worse. Unfortunately, that was only a practice session for a beasting today in the friggin sea. As i tipped up i had a quick look at the conditions and my first impression was ‘Bollocks!’. The big blue wobbly thing wasn’t blue, it was sandy and you couldn’t see the seabed about 6 inches down. It was going to be a difficult day!

I tried, in vain, to get the session started a little later than planned as i was still asleep from yesterday, but that didn’t work either. I got my kit and opted for the wrong wetsuit (you always make the wrong choice when its critical to get it right) as we pushed our kit to the shore the sun tried its best to make me into a boil in the bag (my wetsuit was only half on, but that didn’t matter,the bits that were covered started to melt). Senarios were given and i waited to be called forward. My illustrious victim ‘Pablo’ once again did his own thing, but i suppose this made it more real as it was unpredictable. As i entered the sea, (to my dismay) i found that the snorkel was as useless as ‘Tits on a fish’ instead of sucking air in (as i had with gusto on land) i sucked the Med into my lungs. Once again i sighed! (when i get me kit, this won’t happen again) anyway, scenario one (i can’t remember what it was now) complete, i asked for a moment so i could stop my insides wanting to be out (I NEVER thought you could get sea sick IN the water, but you can) second, third and fourth scenarios done, i lastly (for the morning session) had to get Pablo out of his kit, out of the water and start CPR on land. Well as i didi this a couple of old guys got down onto the scene and asked if i needed any help (they thought that it was real) god bless em. a crowd soon gathered as i gave mouth to mouth and chest compressions. (it should have looked good from a bystanders view) 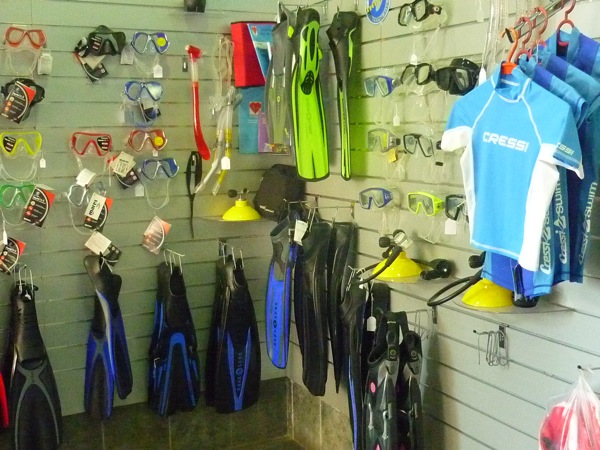 At last the end of the morning came, i dragged Pablo out of the surf (which was firkin big at this time) and got up to the trolley. I could have quite happily sat on it and got wheeled back to the dive centre. This is when i noticed that i had chosen the wrong wetsuit (i had sustained strap rash under my pits from the floatation jacket (It smarts still) i was given my own choice of times to return for the afternoon session (in hindsight i should have said friday) as it was i took myself away for an hour and a half. I fell asleep in the ice cream parlour and just couldn’t face food. Back to the centre earlier than i said i would be (my intention was to have a little nap in the air-conditioned room) that didn’t work either.

Change of wetsuit this time (two wrongs WILL NOT make a right) The scenario was for me to sit around and do nothing until called in to look for a missing diver. It would have been more realistic if Pablo hadn’t lost his fins within the first foot or so of the beach. 20 minutes later after a finger tip search (i told you earlier that it was only a hands length vision) Job done i sat back down and waited. eventually i got the shout and sprang into action with the grace of a new born giraffe. Again the surf decided to mess with my karma. eventually i got to the rescue point and realised i couldn’t see a bloody thing as my mask had fogged up. I unmasked, spat in the lenses, reassured the other diver, then promptly swallowed another lung full of seawater. We found the diver on the bottom as i had to take control of the situation, my plan worked a treat, right up until i realised that swimming through a gap in the rocks towing a bigger bloke than you, is difficult to say the least. It didn’t help the fact that the guide rope that goes down into the deeper parts was thrashing around and caught my fin (I didn’t tell the instructor this as he would have called me names. Anyway, getting back to the shore another crowd had gathered and again two other guys were unclothing and getting into the action. Once they were told it was only an exercise they looked a little disheartened, but I can honestly say that they brought back my faith in human nature, willing to help an total stranger.

All done now, i passed the Rescue Diver course and now need to get a few (8) dives in before i start my Dive Master course. Hopefully it won’t be as intense as the last two days. h my final exam was a breeze. So I’m sitting here just haven eaten an Almond Magnum and feeling sick!!! so i think I’m off to bed to recover from the gash I’ve swallowed from the sea today.

For my friends (wherever you are) X