Now 0700 doesn’t sound too early does it? well no it isn’t, except when you don’t have to be anywhere until 1200 the is. I was so excited i guess, i even made breakfast. well when i said made, i mean made it to Pambis in time for breakfast. A good old fashioned fried malarkey. with coffee, its amazing how many people are in here for breakfast, even more amazing is the amount of Brits that were up, granted i didn’t get here until after 1000, but you get the idea.

Sending last nights blog this morning was a necessity as the bloody tinter web, went all wrong again last night, needless to say that CYTA have lived up to the Cyprus mentality and not turned up when they say they would, not even the next day, nor the day after!!!  oh well, the pub/ cafe is still here until they do. (it looks like its happened again, so if you don’t read this later tonight (saturday i think) then you’ll get it tomorrow (sunday??)

Right, work, painting, with Ian, outside!!!! I got the white paint for the ceilings, and i don’t half hate heights, not to worry, i was given a friggin Transformer for a step ladder, honestly, Optimus  Prime would have had trouble communicating with this Behemoth. i lost it at one point and I’m sure i heard the noise from the film!!!!

Anyway, by the time i sanded half the house down, i was covered it what can only be described as fallout, i looked like a Nuclear winter survivor. (my tan was on hold for today). Even my sunglasses where white! so i took them off, and as soon as i started painting, a glob of paint fell into my eye! i nary fought with the Decepticon ladder as i lost my balance, but the gods were in my favour and i stayed on like a cowboy on a bucking bronco. Obviously no bugger took any notice of the noise of flesh and metal so i was on me own! my fight lasted a full 30 seconds and i walked away triumphant. (although the mess i made had to be quickly cleaned up before Ian saw it)

As the day wore on, i became more concerned with the weight i must have been losing with all the sweat and everything, not a friggin chance! my top still pulled up my belly and i looked like Onslow from the tele! Eventually the whist went and we downed tools, until tomorrow at 0700 (i could cry) but the job is almost finished and even if i say so myself, the flat looks good so far!

Not really a lot more to observe today, except to say, it was a shade over 31 degrees C and my idea of after work refreshments have no turned to Jack and coke (what else?) 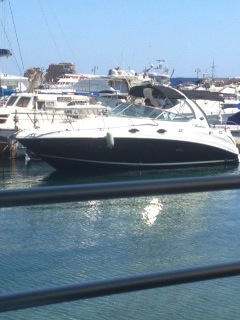