Ive since found its not really a bank holiday, but its Greek independent day apparently. The weather is good (well the wind has died quicker than a Russian Oligarch in Ascot) and the sun is out, Unfortunately this does bring with it the bevy of beauties (I say this in the loosest of terms as most of them are sporting ‘Fish belly white’ shoulders and legs) all ready for the redness to set in within a couple of days on the island. The harbour (seafront) area was packed with holidaying families and school kids sporting their best clobber (all to attract the opposite sex obviously) but again, unfortunately some of them got it wrong and would seem more at ease attracting the same sex (They get so confused at that age)

Talking of age, it seems the average age of the holiday maker (UK of course) seems to be coming down, OR the older generation is being killed off or dying because of the one or two degree heat rise in the last few days…. 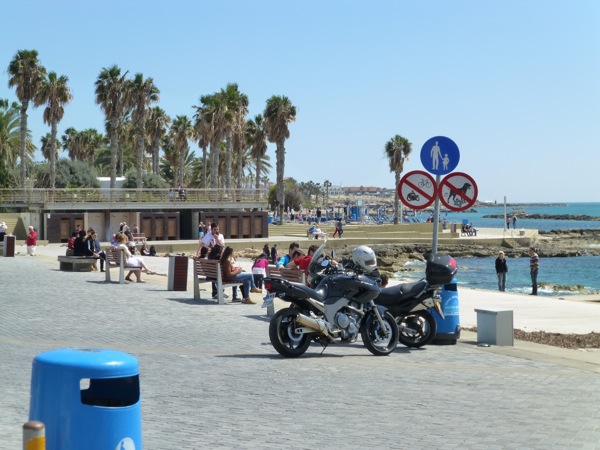 (Im sorry, a car seems to have broken down in the road and is really pissing off a bus driver who obviously can’t get a bus through the gap that has been left, Tooting his horn won’t get the vehicle shifted.)

…but its nice to see a more fit (as in not ready to shuffle off this mortal coil) people here. it only pains me that i am out of here soon, well pretty soon really.  Thats why I’m pleased in one sense that i won’t be around to see the carnage in Paphos tomorrow when the banks open and people are only allowed to withdraw a certain amount per day. Armed guards have been mentioned and it could all go horribly wrong in Cyprus.

Tomorrow i book the bus to get me away either in the afternoon (ill stay at a cheap hotel for the night just to make sure I’m closer to the airport than here) or for wednesday morning. I would rather leave tomorrow as i hate leaving things too late (something that i was adept to in the Army, but this is MY money and MY future, so no ill take NO chances thank you very much) Electronic stuff to be packed and sent back to my sisters as i don’t want to run the risk of possessing shiny stuff in a place that may duff you up for a bottle of water, so the fact i need to travel lighter is slowly dawning on me. My diving gear and a bag of shorts! sorted.

To all of you who read this to the end, wherever you are in the world, have a great time (i don’t know when my next one will be, but i hope its soon) Thanks for the reads and the comments. Heres to Dahab! x

One thought on “Bank holiday!!!!! AGAIN, Its Cyprus”